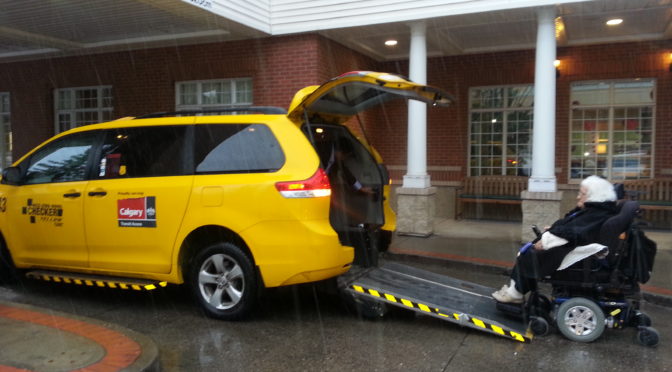 On Wednesday, March 7, 2018, the City of Calgary’s Standing Policy Committee on Community and Protective Services met in the council chamber of City Hall.

The meeting did make some progress, but it remains to be seen how well their decisions become reality. I sat through the meeting and watched a litany of wheelchair-bound persons voice their concerns and experience with the taxi industry. It was upsetting to watch.

Most of the concerns voiced by the disabled were the extreme waiting times required for a cab to show up. Almost all of them had to wait on average so it seems about 90 minutes, but all too often some mentioned three or even six hours for a cab to show up even after placing a time call in expectations of travel or medical appointments.

A few even had to join ranks with the unemployed for want of transportation.

One person even missed his flight because the company failed to dispatch a car for him until long after his time call was due, and the aircraft had reached its destination! The taxi denied him permission to travel!

Persons with disabilities but not wheelchair bound voiced concerns as well. One fellow had no hearing at all without a special hearing aid. It won’t work when carrying on a voice conversation over the phone. His only option was text or App.

Using an app with most companies can be a challenge too for anyone including the able-bodied:
–Apps often fail to recognize the address you’ve given them. When that happens, the voice is your only option.
–If you managed to get an app call through you can, in most cases, track the approaching cab once the computer has found him a match. Once tracking him it may be obvious that the driver doesn’t know where you are, or he’s vanished from the screen. You must at this point phone the dispatcher and have him investigate.

This is where a person hard of hearing must call using text messaging and text messaging only. That’s the only way the company is going to learn that their valued customer has been scooped by a street hail. An all too frequent occurrence with disabled and elderly customers. I know that from personal experience.

There were the usual litany of proposals and counterproposals that you can review on the City’s website. But there was one that stuck out like a sore thumb–thanks to Councillor Gondek–the City’s Fighting Tigress that is absolutely brilliant: —centralized dispatch systems. It will work, and work well for both the disabled and the able-bodied.

What is centralized dispatch you may ask? Well, perhaps you may remember from a few years ago a system started by MADD Canada called Pound Taxi. You’d simply use it by dialing #taxi and a taxi company that’s picked randomly would answer the phone. That’s a crude form of centralized dispatch.

With today’s technology, more advanced systems are possible. Most protracted response times are the result of computers now in use failing to find you a match—a trade name that means a vacant cab in your area.

We can now be a little more sophisticated with new technology. Simply put, if a match is not found within five minutes. With 1881 taxis in the city and numerous TNCS (Uber), there’s bound to be one nearby within a reasonable amount of time. All computer-aided dispatch must be so programmed.

All that customers really care about is professional timely service without incident.

If you wish to see the City’s Video of this meeting or review its minutes click HERE .

To review the minutes of the SPC on Community and Protective Services for March 7, 2018, click MINUTES