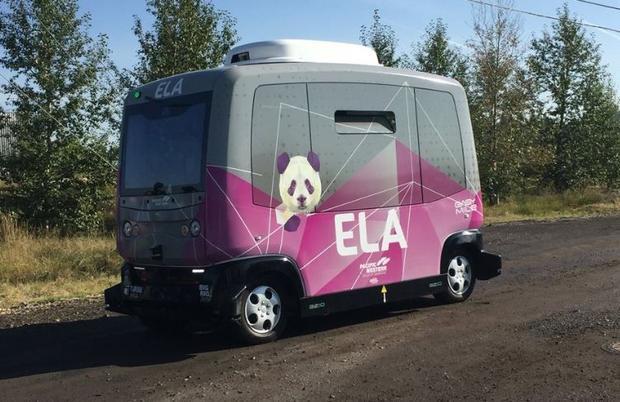 Relax cab driver. You won’t lose your job over driverless taxis. Such vehicles will only make your job easier—and here’s why.

I had just spent an hour riding at the leisurely speed of a horse drawn carriage back and forth between the zoo and the Telus Spark Science Center aboard an ELA 12 passenger bus without any incident whatsoever.

Last week Brennan Doherty of StarMetro Calgary reports that during his ride, the bus stopped aggressively to yield right of way to a squirrel or Magpie—yes these cars can detect an animal or obstacle that small.

The ELA crew and I developed a consensus on various aspects of the driverless car—one of which was that professional drivers need not fear for their jobs—only their job description is likely to change with the type of vehicle he’s operating. Vehicles driving the public around must have a trained attendant on board to keep order and respond intelligently to emergencies and software malfunctions. One never knows when the operator must switch to manual control as airline pilots do.

Current technology in driverless vehicles appear to be inadequate for sharing the road with manual vehicles on high traffic volume and freeway speeds. It appears for the moment at least; such vehicles will have to stay off certain roadways or run during certain hours. Dedicated road and laneways may relieve some of the problems. Technological improvements will undoubtedly change all that. However, the driver still has to be able to take manual control of such vehicles at any time on instantaneous notice.

The ELA I was in runs entirely on four 48-volt batteries that require five hours to recharge. And therein lies another problem with electrically powered cars in general and driverless cars in particular. If the owner can recharge his or her battery at home every night, no problem. But no one can rely on having their car at home in a timely enough fashion for recharging. Gas stations must get involved too.

For starters, batteries have to be designed for very rapid recharge in the space of five minutes or less. And all batteries must have a cross manufacturer design and shape for a rapid battery exchange. The battery has to be capable of rapid removal and installation of a replacement battery on site. The attendant would simply remove the battery for recharge and install a fully charged battery in the space of five minutes.

Highway infrastructure and legislation is required to phase in such vehicles and phase out gasoline and manual cars—an undertaking that will take at least a generation to complete.

One thing is certain in the foregoing debate, is that it will be a very long time before the driver whether privately or commercially owned will disappear from the automobile. There must be a qualified person onboard at all times.

Taxi and bus drivers can relax, there must be someone on board to maintain order and ensure the vehicle is following the correct route.

—John Bliss  the e-book  I NEED A TAXIS PERMISSION TO GO OUT an essay on wheelchair accessible taxis is now available.  To purchase or read click here.